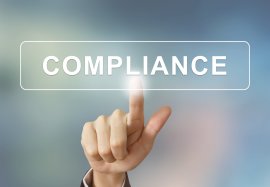 When it comes to letting a property, compliance and good practice is all-important. So it’s very pleasing to see the latest research from deposit protection scheme SafeDeposits Scotland, which found that 99.9% of Scottish landlords are complying with tenancy deposit laws.

Only 290 landlords have failed to protect tenancy deposits since December 1 2017, with non-compliance reassuringly low.

The figure comes from cases published by the First-tier Tribunal for Scotland (Housing and Property Chamber) which presides over tenancy deposit regulations and is the main route of redress for Scottish tenants.

With around 257,000 registered landlords in Scotland’s private rented sector, 290 cases of non-compliance represent only around 0.1% of that number.

What is tenancy deposit law in Scotland?

Since 2012, landlords in Scotland taking a deposit from their tenant have been compelled, by law, to lodge the deposit with one of three government-approved schemes within 30 working days of the tenancy starting.

Those who don’t comply could face fines of up to three times the deposit value being awarded to the tenant.

Although the maximum penalty available is rarely used – with the average award being 1.7x the value of the deposit – it’s still not something landlords should risk, with the research finding that landlords had been ordered to pay a total of £321,609 to tenants, averaging £1,109 per case.

The highest award to tenants was £7,500, in relation to a rented property in Edinburgh, with the tribunal awarding the tenants three times the original value of the deposit after the landlord failed to lodge it with a government-approved scheme.

Ian Potter, chairman at SafeDeposits Scotland, says deposit protection legislation is designed to protect tenants and provide landlords with a ‘cost-free process to adjudication’ when things go wrong with a tenancy by way of rent arrears or damage.

“There is no cost to either party for using the tenancy deposit scheme to adjudicate a dispute or going to the First-tier Tribunal in an instance of late or non-protection,” he said.

“Our research into cases upheld by the First-tier Tribunal has revealed that while some landlords continue to either be unaware of, or fail to comply with regulations, they are a tiny minority. In fact, SafeDeposits alone currently protects more than 136,000 deposits, so the non-compliant landlords represent only a very small fraction of the broader, national picture.”

He added that, during its first two years, the First-tier Tribunal system has been successful in providing a simple recourse opportunity for tenants as well as highlighting the legal need to protect deposits for landlords who were unaware of the system.

In most of the cases looked at by the Tribunal, landlords had not acted out of malice, but were either unaware of the legislation or had forgotten about it. This suggests that it’s something otherwise compliant landlords could find themselves guilty of if they aren’t careful enough.

For some people, it’s a case of them not considering themselves landlords as they haven’t purchased through buy-to-let, having instead inherited a property or moved in with a partner - and therefore viewing letting as being outside of legislation. Nonetheless, this isn’t the case, and doesn’t save landlords from fines or reassure tenants who have their deposit left unprotected.

It’s one of the best arguments for working with a compliant, responsible local letting agent, who can ensure you are playing by all the rules when letting your home. Here at Letting Solutions, West Lothian’s first dedicated lettings agency, we have the experience and knowledge to ensure your let is fully compliant and above board.

A story revolving around a tenancy in Scotland has hit the headlines of late, and further emphasised how vital it is for landlords to abide by the law when letting property.

Dambaru Baral is thought to be the first ever tenant to have been awarded damages under new Scottish lettings legislation, with the First-tier Tribunal awarding him £18,000 after it was revealed he was unlawfully evicted back in 2015.

He raised the case in September 2018 against his landlords who had removed him from his occupancy under an assured tenancy. In this case, a representative of the landlords entered the property, removed the tenant’s belongings and changed the locks because the tenant was in rent arrears. However, no warning had been provided and there had been no previous attempt to cease the tenancy.

It had been established at an earlier hearing that the representative had taken possession of the property without a court order, claiming that he believed or had reasonable cause to believe that the tenant was no longer occupying the let property.

The Tribunal, though, rejected this defence, saying the landlords had accepted that they had gone to the flat and filled several cardboard boxes with the tenant’s belongings.

“The record taken by City Building, as indicated at paragraph 30 above, was that there were seven boxes. It is also apparent, from the photographs taken by the applicant, that there were items on top of the boxes,” it said.

“On any reasonable view, the sheer volume of the applicant’s belongings at the tenancy were not such as to indicate that he had ceased occupation.”

As such, the Tribunal concluded that an unlawful eviction had occurred and awarded damages of £18,000 based on a surveyor’s reports.

The above case, once again, highlights how crucial it is for landlords to work with a good, compliant letting agent.

As part of our tenancy management, we offer professional lease preparation and execution, advice on safety issues and other regulatory requirements, and also deal with security deposits and insurances, amongst many other things.

You can give us a call on 01506 496 006 to find out more. We also provide a free and instant online valuation to give you an idea of how much you could be charging in rent each month and how much your rental property could be worth.