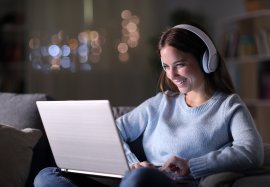 If you’re thinking of selling your rental property now, or in the future, or just want to increase its attractiveness to current and future tenants, good broadband is one way in which you can do that – now more so than ever.

Due to the pandemic, more people than ever are working exclusively from home, and most kids are being home-schooled, while strict measures remain in place across the whole of the UK. Since March last year, we’ve all been instructed to stay at home as much as possible, which has meant all manner of Zoom quizzes, birthday parties and meetings, as well as other virtual forms of fun and an increase in TV and film watching through traditional means, catch-up and streaming services.

The UK’s digital infrastructure has never been placed under such pressure and, a few hiccups aside, has coped remarkably well.

Here, we look at news from the Department for Digital, Culture, Media and Sport, which has just published a report showing how superfast broadband created a jump in house prices by up to £3,500 thanks to a government-backed rollout to millions of homes.

What were the findings?

The UK-wide superfast programme pushed broadband speeds up a gear for 5.5 million homes, with £2.7 billion of economic benefits as the rollout helped to create 17,600 jobs, the new report said.

The £2.6 billion UK government scheme to roll out superfast broadband to ‘commercially unviable’ parts of the UK has seen house prices rise by up to £3,500, the report showed.

The UK government says more than 96% of homes and businesses can now access superfast broadband, which provides a minimum of 30 megabits per second - fast enough to allow multiple people to hold video calls, watch high-definition movies and enjoy online gaming at the same time.

Despite this, Digital Secretary Oliver Dowden highlighted that 11 million - or two in five - homes are yet to upgrade to superfast despite it being available in their area. The UK government is now preparing to kick off its new £5 billion programme to roll out even faster gigabit broadband.

The original programme, which started in 2012, saw the UK government join forces with councils and devolved administrations to invest more than £2.6 billion to ensure superfast speeds were rolled out to areas across England, Scotland, Wales and Northern Ireland where no plans for commercial build were in place.

Gareth Williams, chief executive at Gigaclear, said: “The Superfast Broadband Programme has extended fast, reliable connectivity to areas that would have otherwise been left on the wrong side of the digital divide.”

What is Scotland’s broadband programme?

As well as benefiting from the above UK-wide programme, the devolved administration at Holyrood has also been working to improve and extend Scotland’s broadband and mobile networks to benefit communities and businesses across the country.

In the Scottish Government’s digital strategy, Realising Scotland's full potential in a digital world (released in March 2017), it aimed to:

The digital infrastructure action plan sets out how the Scottish Government is hoping to achieve this goal.

The Digital Scotland Superfast Broadband (DSSB) programme achieved and, as it turned out, surpassed its target of extending fibre broadband to 95% of all properties across Scotland by the end of 2017.

As a result, approximately 950,000 homes and businesses across Scotland are now able to access fibre broadband services.

This programme is now being backed up by the Reaching 100% Broadband programme, which is a commitment, as it says on the tin, to deliver 100% superfast broadband coverage across Scotland.

The Scottish Government says that any home or business that doesn’t have superfast broadband delivered commercially – or through programmes such as DSSB – will be eligible for investment through the R100 programme.

In October 2019, Paul Wheelhouse – MSP for the South Scotland region since 2011 and the Minister for Energy, Connectivity and the Islands - confirmed that BT were the successful bidder for the Central and South lots of the R100 procurement, in which the Scottish Government will invest £83 million and £133 million respectively.

On December 14 2020, Wheelhouse confirmed that the Scottish Government has also signed a contract with BT for the North lot of the R100 procurement, in which £384 million will be invested.

The SNP-led administration says the contracts signed with BT – alongside ‘greater than anticipated commercial build’ – will allow it to go significantly beyond its superfast commitment by delivering a substantial amount of full-fibre connections. This will mean that many premises could be capable of accessing download speeds of up to 1 Gigabit (1,000 Megabits) per second.

Why good broadband is a must-have for tenants

As a landlord, you’ll find it far easier to get your home let to new tenants if you can offer fast broadband speeds and reliable connections. With so many more people now working from home, and relying on fast internet to carry out their daily work, it’s even more of a must-have than it was before.

It is likely to be a dealbreaker for many tenants, and potentially the number one priority in many cases.

Most places do offer decent broadband speeds nowadays, but it’s something that is largely out of your control as a landlord as it will depend on geography and other variables. That said, if you know you have particularly fast and reliable speeds, use this to your advantage by making it front and centre of your sales pitch.

In the areas we at Letting Solutions operate in, we know that remote workers and Netflix bingers won’t be left disappointed. The average real-world speed users will see in Livingston is 42.19 Mbps, which is 37.56% above the UK national average of 30.67 Mbps. It can be as high as 907.3 Mbps. The main providers are BT, Virgin Media and Sky Broadband.

Given the importance of broadband, now more so than ever, you may want to pre-install a package before a tenant moves in, so they’re all set up to go immediately rather than having to wait a week or two to get it set up off their own backs. Sometimes, however, you may have especially tech-savvy tenants who will want to – or be very happy to – set up their own internet. Work with your agent and tenants to work out the best course of action.

Here at Letting Solutions, West Lothian’s first dedicated lettings agency, we are continuing to operate throughout the pandemic.

You can find out more about our current hours of service and our current ways of working here.