Contact Me
Brian Callaghan
Joint Managing Director and Founder
Brian has over 40 years' management experience, 25 of those in the property industry including major property acquisition and sales. During periods as a senior manager in Government he led a number of teams involved in various fields including planning, the NHS, and housing. Brian's role is to ensure that the service provided to our clients is second to none, and fully meets their requirements.
Read Profile

Contact Me
Susan Callaghan
Joint Managing Director and Founder
Susan has 20 years' experience in letting and property management, and developed her own portfolio of refurbished properties in West Lothian and Edinburgh. Susan's main role is to develop new products and services within the business, for the benefit of our landlord and tenant clients.
Read Profile

Contact Me
Lynn Martin
General Manager
Lynn Martin, has 25 years' experience in management, 12 of those in property letting, management, repair and refurbishment. Lynn's principal role is to monitor the quality and speed of our services, maintain excellent customer service, and ensure that members of the team are fully qualified for the work they do, pursuing ongoing training.
Read Profile

Contact Me
Jo Shaw
Deputy General Manager
Jo has been with Letting Solutions since 2008, having previously worked in estate agency for over 7 years. Jo's role is to provide leadership, quality management and training of the Team, and coordinate move ins to ensure the best possible experience for tenants and landlords.
Read Profile

Contact Me
Rhona Douglas
Finance Manager
Rhona has over 25 years' experience of customer service within the leisure, retail and manufacturing sectors, including 10 years in villa management in Portugal. Rhona's role is the safeguarding and management of client and rental funds including collection and distribution of rents, issuing financial statements and information, and advising clients.
Read Profile

Contact Me
Stephen Mackay
New Media and IT Administrator
Stephen's role is to ensure that New Media and IT are used to provide the maximum benefit to our clients in terms of client experience, information and accessibility.
Read Profile

Contact Me
Cecilia Harley
Landlord Advisor
Cecilia has over 25 years of experience in the hospitality and tourism industry and holds a BSc in Hotel & Restaurant Management. She is from Sweden and has lived in other Western European countries before she came to Scotland almost 20 years ago. Cecilia's role is to advise landlords on the range of services provided by Letting Solutions to meet their particular circumstances, as well as the safety and regulatory requirements for renting out a property. Together with her colleagues Cecilia can advise existing or potential landlords on the best areas to purchase properties for rent.
Read Profile

Contact Me
Kailah Robertson
Office Administrator
Kailah's role is to keep landlords and tenants up to date on maintenance and inspections involving their properties, arrange on-site attendance by contractors and maintenance staff, and ensure all the parties are kept well informed. Kailah is taking a Modern Apprenticeship course within the business through West Lothian College.
Read Profile

Contact Me
Stephen Leitch
General Maintenance and Repairs
Steven is responsible for general maintenance and repairs work, and is qualified in tiling and Legionella and PAT testing. He has specific skills in painting, plastering, taping and general building work.Steven is a key resource for landlords requiring urgent repairs or maintenance work.
Read Profile

Steeped in history and surrounded by beautiful countryside, West Lothian is Scotland's secret gem. Positioned midway between Glasgow and Edinburgh, and served by major motorway networks and train services, West Lothian provides good access to all areas of Scotland.

An eclectic mix of new and old creates the landscape for this central part of Scotland. From traditional Scottish town centres to historical villages and a large, modern centre there is lots to see, do and learn about the area.

The thoroughly modern town of Livingston has the largest population with a thriving business community enjoying the benefits of excellent sports, recreational facilities and one of the country's top shopping destinations.

Steeped in history are the older towns of Torphichen and Linlithgow who between them feature a 13th century church, remains of a palace and Loch. Surrounded by beautiful countryside they offer a variety of walks and the opportunity to soak in the outstanding scenery.

West Lothian has a wide range of leisure pursuits on offer for anyone in search of adventure or relaxation. For the active, there are dozens of golf courses in the area plus sailing at the Low Port Centre. This is also excellent walking territory, be it gentle saunters in the many green spaces or something more taxing, such as the Bathgate Hills where the views are worth the hike, and the Pentland Hills which offer more than 100km of signposted trails to explore.

The area's heritage is rich and diverse, and well worth exploring. In just a day you can take in historic attractions - prehistoric burial sites, palace ruins, castles and stately homes - that span hundreds, even thousands, of years.

Towns and Villages in West Lothian

Broxburn and Uphall are both West Lothian towns situated on the Union Canal between Edinburgh and Glasgow. Broxburn (also known as 'the valley of badgers') and the nearby town of Uphall both offer a range of local attractions and amenities, including top quality butchers, cafe's, restaurants and cosy Scottish pubs. The Union Canal stretches across the central belt of Scotland, cutting through Broxburn. It provides lots of outdoor activities for visitors, including walks, cycles

Whitburn, eight miles south-west of Livingston, was a mining town until the closure of its colliery in 1980s.

The settlement of Newbridge is just to west of Edinburgh Airport, offering great views of incoming aircraft and access to the M8 and M9.

Kirknewton is a residential settlement to the west of the Pentland Hills, 10 south-west of Edinburgh.

Fauldhouse is small town nine miles south-west of Livingston, on the western boundary of West Lothian.

The conservation village of Mid Calder lies on the River Calder, a mile south-east of Livingston in West Lothian.

Blackburn is a small industrial town in West Lothian. Originally a centre for cotton manufacturing, Blackburn, situated five miles west of Livingston, turned to coal mining in the mid-19th century.

Dechmont is a village situated two miles west of Uphall in West Lothian.

The village of Winchburgh is situated between Edinburgh and Linlithgow in West Lothian. Its growth was thanks to the opening of the Union Canal in the 19th century and the manufacture of shale oil. Production stopped in 1960, though the strange shale oil waste 'bings' remain a characteristic feature of the West Lothian landscape today.

Linlithgow is famous for its Palace, birthplace of Mary Queen of Scots. This wonderful 15th century ruin is perfectly positioned beside Linlithgow Loch. Mary Queen of Scots was born here in 1542, becoming queen six days later. After a fire in 1424, James I started construction of the present palace, but this took over 200 years to complete. Linlithgow Loch is a haunt for wildfowl, especially in winter. Boat trips on the Union Canal are another popular excursion.

Livingston is a 'New Town' west of Edinburgh. It is situated in the Almond Valley, 13 miles west of Edinburgh. Built in 1962, it was the fourth of several so-called 'New Towns', and further developed in the 1980s. At the heart of Scotland's 'Silicon Glen', hi-tech industry flourished and helped the growth of the town until the 1990s. Today a large retail centre proves popular with locals and visitors alike.

The village of West Calder is four miles south-east of Bathgate in West Lothian. It is a traditional Scottish village, set in the West Lothian countryside with buildings made from light grey stone. West Calder flourished during the oil boom of the 1860s, James Young had set up the worlds first oil refinery in Bathgate to extract oil from Cannel coal.

18 miles south-west of Edinburgh and Glasgow, Bathgate is West Lothian's second largest settlement. With a history dating back to the 17th century, the town owed its growth to farming, weaving and, more recently, to car production and engineering. Nowadays, this bustling little town is well served with shops and eateries of all kinds. It also boasts a thriving night-life with plenty of popular pubs and entertainment on tap.

East Calder is village two miles east of Livingston in West Lothian. Nearby Calder Wood is a pleasant country park with woods, river and scrubland popular with the local wildlife.

'Edinburgh', said the writer Robert Louis Stevenson, 'is what Paris ought to be'. Its magnificent architecture shifts from the lofty tenements and narrow closes of its medieval Old Town as they tumble down the spine of the Royal Mile, to the grace and geometric precision of the Georgian New Town. Above it all, in its towering splendour, stands the Castle. Every step is a revelation - an alleyway which reveals an ancient courtyard, or a wynd which opens up a new panorama. And yet within this sweeping elegance is a compact city, a bustling city, and above all a city which rewards every visitor.

Things to do and see in and around West Lothian

Linlithgow Canal Centre is a VisitScotland 3-star attraction operated entirely by friendly, unpaid members of Linlithgow Union Canal Society (LUCS). The Canal museum is housed in a former canal stable and exhibits records, photographs and artefacts associated mainly with the Union Canal.The display covers the development of the British canal system and explains why and how the can was built, the water supply, the canal at work, important dates in its history and the wildlife to be found in and around the

The Five Sisters Zoo offers a wonderful opportunity to get up close to over 180 different species of animals, birds and reptiles from around the world. There is lion's, lemurs and lynx, bears, meerkats and monkeys, parrots and porcupines, bat eared foxes, bunnies, reindeers and raccoons to name but a few, all adding up to an exciting, educational and great value visit for all the family.

Hopetoun House is Scotland's finest stately home and is a place of outstanding natural beauty and has been home to the Hope family since 1699. Explore the historic ancestral home, the 150 acres of gardens surrounding the house, the magnificent architecture or relax in the licensed tearoom. Hopetoun will be a familiar sight for Outlander viewers as it was used as the home of the Duke of Sandringham. Explore the sumptuous rooms where the Duke enjoyed spending time.

The Hive Play and Party Centre

For the little ones: The Hive has a dedicated baby toddler area that you can explore with your child. They can discover new skills and develop their independence in a safe and secure environment, with physical obstacles to tackle and soft bricks to construct.

For older ones: Squeeze through the mouse hole climbing higher to the bee tube where you can give the grown-ups a cheeky wave, before whizzing down the buzzy slide. Swing on the dangling snakes on to the log stepping stones to take a ride on the sky glider. Tackle the giant balls and squish through giant rollers before taking the bridge to the secret hive. 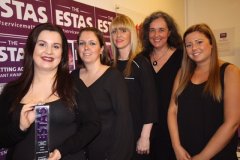 See All Our Properties To Let